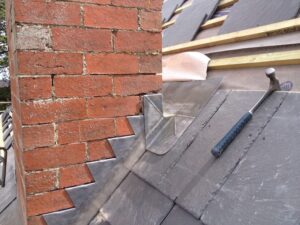 Hallmark Roofing Solutions is here when your chimney has developed a leak you will usually notice water staining above the chimney when it rains. It will likely be on the ceiling and perhaps running down the wall as well. This indicates that the chimney flashing is allowing water in and needs to be re-flashed.

Chimney flashing is commonly used to surround the base of a chimney shaft to prevent water from penetrating the inner flu. They can also be used to reduce the efficacy of a fire, stabilise the chimney stack and improve airflow. These flashings can also act as insulation preventing heat loss from the roof and the chimney.

Chimney flashing is used to seal and protect the joints between a building’s roof and chimney from water penetration. The joints created by the intersection of the roof and chimney are among the most vulnerable areas of roofing systems. They constantly expand and contract in response to changes in humidity, temperature and age. The greater the number of such projections, the greater the potential for serious leaks. Flashing is used at these intersections to keep rainwater from leaking into the building. It makes joints at these junctions watertight, while at the same time allowing the natural expansion and contraction of materials to continue.

Whether you have a leak or a broken roof tile or need help with slate repairs, we do it all. From new roof installations to minor leak repairs, you can rely on us for a quality roofing service every time. We also provide emergency roofing repairs throughout Munster.
We cover all aspects of roofing including:
If you are looking for a qualified roofing contractor in Munster,